The Fall of Benedict Arnold 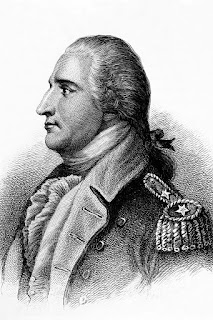 I must apologize to the organizers of the Krebashia Kingdom Medieval Fair. It was held this past weekend, and I had all intentions of attending. However, due to the thunderstorms and bad weather, I was unable to attend. I am very disappointed in not attending because there were so many vendors, artists and performers that I wanted to see. Please read about my review of this fair from last year.
In our last post, we described Benedict’s Arnold’s actions in the Battle of Saratoga. This victory at this battle was pivotal in the United States winning their independence from Britain.
Now, I would like to describe how the patriot Arnold, became the traitor.  It is a story of love, poverty, greed and envy. Our story takes place right after the Battle of Saratoga.
Having been injured on the battle, Arnold spent several months recuperating. He would not allow the surgeons to amputate his leg. As a result of the broken and wounded leg being improperly set, it would now be 2 inches shorter than the other.
During his career, Benedict Arnold was denied promotion by the Continental Congress; many other officers took credit for his achievements on the battlefield. His main supporter was George Washington, who respected Arnold as being a bold field commander.
In May 1778, Arnold went to Valley Forge, Pa, where he took place in the first recorded Oath of Alliance to the United States.
Because of his heroics in battle, George Washington appointed him military Commander of Philadelphia, PA., after the British abandoned the city. It was here that Arnold’s disenchantment to the American cause, and his plans to betray that cause, first manifested themselves.
Arnold had spent much of his own money for the cause for revolution. In Philadelphia, he began to capitalize financially on his position (this was not unheard of, but Arnold went to extreme). This money helped him live an extravagant lifestyle, throwing lavish parties and became a prominent figure in high society; this also included those still loyal to Britain.
He met Peggy Shippen, who was the daughter of a judge who was a British loyalist. Previously, Ms. Shippen had been courted by a British Major named John André (who had been given charge of British Intellegance) This meeting with Shippen and Arnold, and their eventual marriage (April 1779) to her, would be the key in his betrayal.
Arnold was introduced to André either by his Peggy Shippen, or by Ben Franklin’s son (who was also a British loyalist). Although she may or may not have, introduced him to André, Peggy was certainly involved in exchanging correspondence between the two. Arnold began giving the British information about troop formations and locations. Due to a disagreement about financial compensations, these correspondences ended.
In Philadelphia, many patriots began a house-to-house search of loyalists. Arnold requested protection for himself and the Shippen in-laws and other close friends; they were rebuffed by Congress. It was also at this time that rumors rose that Arnold was not only protecting loyalists in the city, but helping them.
A court martial was to be held against Arnold. It was delayed because the British had taken over Stony Point, NY, a strategic position.  It may have been this fact, that Arnold was cleared of all charges except several minor ones.
Shortly after his was cleared, Congress investigated Arnold’s expenses in his participation in the earlier battle of Quebec, Canada. Arnold claimed that in his retreat, he had lost most of his documentation for expenses. Without this proper accounting, Congress ordered that he owed them money for reimbursements which were made. Arnold was furious about the ruling, and resigned his position in Philadelphia.
There were now discussions about giving Benedict Arnold the command over West Point, NY. This was one of the most significant positions on the Hudson River.  Arnold again opened talks with the British, this time negotiating about him surrendering West Point to them.
After being appointed in command of West Point, and the lower Hudson River, Benedict Arnold began weakening its defensive positions.  Arnold continued to negotiate the price for his betrayal, and many letters between him and the British were misfiled or arrived at different times. This caused a delay in his delivering West Point.
Major Andre was captured by American troops, and some correspondence between Arnold and the British was found.  Arnold upon hearing the news, fled to New York City where the British was still located.
George Washington wanted André to be confined, so he could be exchanged for Benedict Arnold, this was refused and André was tried and executed. Arnold was given service in the British Army, gave the rank of brigadier general. He captured Richmond, and led raids throughout Virginia.  Arnold eventually went to England.
Although Benedict Arnold’s name in America is synonymous with an act of betrayal; he had not much luck in England either. Many people considered Major John André a hero for his patriotism, someone who died for a noble cause; but they also thought his death was caused by Arnold, and he was perceived as a mercenary, seeking only financial gain for his duty as a soldier.
Arnold died on June 14, 1801 at the age of 60.  When the church he was buried at was being renovated (as a result of a clerical error), his remains were moved to an unmarked mass grave, where they remain today.


W.A. Rusho is a professional wrestler, historian, and author of the novel “Legend of the Mystic Knights”. The previous publisher of this novel is no longer in business, and so he is actively seeking a literary agent or publisher. If you wish to contact him, email him, or visit his website.