Horror Hosts on the Web 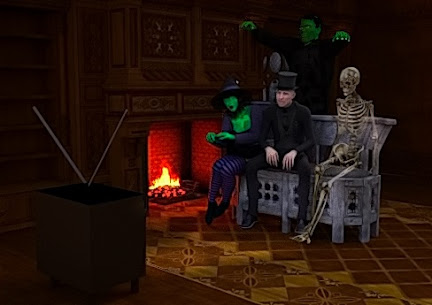 It has been quite a long time since I have posted anything on this blog.  This is mostly due the coronas virus; there were no renaissance/medieval or other faires or events I could attend, so I had little to write about this year.

As many of you know, I love Halloween, so I am not going to let this holiday go by without a few posts during the month of October.

Every year, I have written a post about monster/horror hosts. Usually it included horror hosts that were famous or those that had an impact on me. These included the early ones such as Vampira or the very famous ones like Elvira. This year we are delving into something more exciting, and more available to audiences than ever before.

Back in the day there was a horror host for almost any local TV channel, they were legends in early television.  You can read more about this in a previous blog post.

After this, the horror host became famous across the country.  Individuals like Elvira, and Joe Bob Brigg’s shows were carried on numerous networks.  These individuals usually started out local and then branched nationwide.

Today, it seems with technology, a local version of the horror host has returned, except they are not that local.

Social media sites such as Facebook has allowed some to create a horror host character and bring it to an audience.  Others have found the same experience with other sites on the internet, and even found a niche on country wide television.

The following include some horror hosts I have followed for some time or have recently discovered. 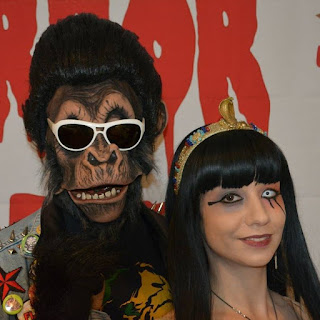 The Mummy and the Monkey (Harry Scary Hangout) This is Janet Decay and Grimm Gorr. They broadcast on Facebook usually on a Friday night. Their show is very well paced and packed with excitement and jokes.  The movies they show might not be the best quality (they are limited to movies which are in  the Public Domain, many horror hosts do this), during some of these movies (let’s say limited on entertainment values) the mummy and the monkey will add sound effects to spice things up.  Make sure to check them out soon because there are about ready to broadcast their 100th show.

Usually after a Facebook broadcast, they have the Harry Scary Hangover show on YouTube to discuss the movies and other topics.  The Mummy and the Monkey also sell some wonderful items on their Ebay page. This is a new discovery for me, and I have become a dedicated fan. Make sure you check out the skits with Stasha from the Old Country. 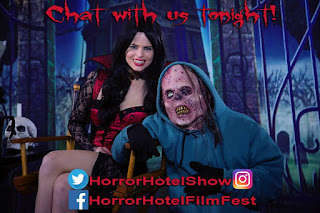 Horror Hotel – I almost did not include Horror Hotel in this list because although it started out on the web it is being broadcasted nationwide, it is a show that has a larger fan base than most on my list.  This has been my favorite for several years now (check out one of my previous posts). It is hosted by the lovely Lamia, Queen of the Dark, the mother of all vampires.  Her beauty and charm are only matched by the comedy of her program, and her knowledge of the film industry and movies.  Every episode she will give detailed information about the specific movie played as well as the actors that starred in it. See is joined by Lilith her snake and lil zombie and other wonderful characters. Each year there is a International Horror Hotel Film Festival and Convention (which I am planning on attending next year) held in the Northeast Ohio area.

Horror Hotel can be viewed on its own Roku channel page and can also be seen on Retro TV (on the web and broadcast tv) there, but also on the Action Channel throughout the country.  I often state if you get a chance watch her show, you will not be disappointed.  If I had to watch only one program, this would be it.

Speaking of the Horror Hotel Convention I mentioned above, they have a contest for horror movies, soundtrack and scripts etc.  Readers of my blog will remember Caitlin Stedman from the Saratoga Springs Movie Festival.  She had written a script for a horror comedy entitled “Oh No, It's the End of the World”, I suggested to her to submit it to the International Horror Hotel Film Festival Convention contest, well she won the 2020 Short Horror-Comedy Script. Congratulations to Caitlin for writing such a great script.

Now let us get back to talking about other horror hosts. 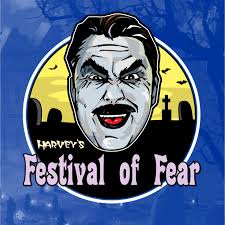 Halloween Harvey’s Festival of Fear- Another sampling from the Retro Channel.  His show is very humorous  show similar the classic "horror host" genre that was so popular in the 1950's and 60'.  Each week there are skits from him and other members such as  Wanda, Fast Freddy, and Zelda. Check him out on his webpage, and he does also make personal appearances.

Since I have mentioned Roku many times, there are numerous channels that all have horror hosts and also reviewers of the horror movies.

OSI 74- this is another Roku channel with many horror hosts. Please be advised some of the content is adult themed.

Count Gore de Vol Presents: he is very significant in several ways but mostly because he was the first horror host to present a weekly show on the Internet.

Horror Host Network- as the name suggests a network featuring some horror hosts.

If you do not have a ROKU here are some sites you can find on the web pr through social media.

The Vortexx Horror Host Network is an online show that shows numerous hosts, they also have a YouTube channel that also has past shows or promos.  This is a wonderful site.

There are so many more I could discuss here.  I want you to seek out the above-mentioned horror hosts and look for more.  The movies they show might be limited, but you will find each one has its own unique way of presenting them. I encourage each of you to seek out horror hosts.

As I stated above many of these shows are excluviely on social media or the internet, but some are broadcast on networks with local affiliates, so do some searching for these horror hosts. I will give credit to these sites to begin your search

Horror Habit- Has a great list, and links where to see the shows

There are some wonderful groups on Facebook for people who enjoy horror hosts:

Horror Hosts And Their Fans

MonsterMash.... The history of the horror hosts

Some of the horror hosts I have mentioned might have a limited selection of movies and unimpressive sets, due to budgets, but each one tries to put on a great show.  They put their time, heart and souls into each episode. They try to entertain, educate or sometimes just act silly; but they do it for you.  These people are keeping the art and tradition of the horror host alive, and I salute each one

Next Time: Some more Halloween fun

W.A. Rusho is a professional wrestler, author and historian.  Read more about him on his homepage at www.warusho.com