The Krampus and other Wonderful Christmas Terrors (part 1) 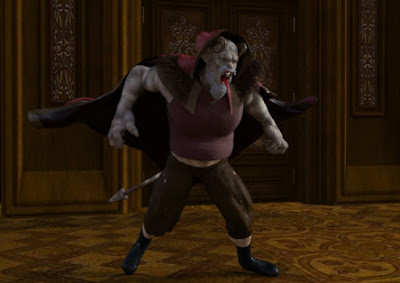 Christmas is a time of joy and peace among the human race. This is what we all hope for, but there is a darker sinister side of Christmas that is rarely discussed.  Let us look through the veil of the joyful Christmas and get a glance at its darker side.

Frau Perchta- originated celebrated in Austria and Bavaria.  The history of this story, like so many comes from Jacob Grimm (yes, from Brothers Grimm) and more recently Lotte Motz a great historian of Germanic mythology and folklore.

Her name may mean "the bright one". She is often depicted wearing a white gown or dress. She is often displayed as a lovely woman, with skin that was white (hence her name) or an old haggard looking woman with a large foot.

She was responsible for enforcing certain rules dealing mostly with spinning and weaving. The most disturbing accounts of her was she would search houses looking for children, mostly or servants.  If they worked hard at spinning during the year, she would leave a coin as a reward.  If this person was lazy, she would rip their stomachs open, tear their insides out and stuff them with straw. 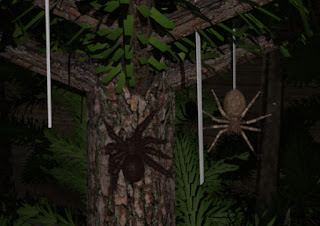 Christmas Spiders- Ok, this is not a scary and terrifying one, unless like me you go into a catanionic state when you see one.   The story of these spiders are similar to the shoemaker and the elves.  There are several variations of this story but this one is a popular one. A poor widow and her children loved Christmas, and although she could not afford gifts, she at least wanted decorations for her tree. In the spring an acorn fell inside the house and rooted itself into the floor. All year they children took care of it and it grew. When it came time for the holidays, they were too poor to get decorations.  The local spiders heard the children cry in their sleep, and they decided to do something nice for them.

The spiders worked all night spinning their webs to decorate the tree. When the family woke up, they could not believe their eyes as the tree was decorated in splendid white webs.  Afterwards, when the sun rays hit the web they turned into silver and gold, and the family was poor no more. In other versions it was a visiting St. Nicholas that turned the spider web into silver and gold.

To this day a spider in Poland, Germany and Ukraine making a home in your Christmas tree is a sign of good luck.

Mari Lwyd we will go to Whales to learn about this wassailing custom. This custom would consist of a person (usually several) having a costume consisting of a horse skull (or decorative one made of something similar to paper mache) and having a white cloth or sheet covering their body, so you would only see the horse head.

They fist would knock on a door and sing a song that asked for entry.  The residents would give an excuse of why they should not enter, this resulted in the horse headed visitor to again singing or reciting poetry asking for enter.  This would go back and forth until the resident inside ran out of reason for them not to enter. this is called pwnco.

Once inside the one of the visitors still in full dress, would terrify children run around disturbing or knocking down items while the leader of the group would try to restrain him, during this time they would be singing or dancing, eating, drinking and singing.

This holiday may have derived from pagan times when during celebrations such as May Day or Halloween where people would parade around with horse skulls, eventually this would merge with the custom of wassailing.

We are going to visit Iceland for the next couple Christmas tradtions, they seem to get more terrifying the more north you go. 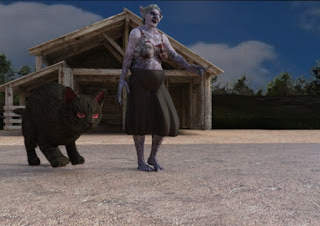 Gryla and Leppaludi_ First Leppaludi is a lazy giant who does not much except sleep in a cave. Gryla on the other hand is a vicious giantess who cooks and eats naughty mischievous children. Originally, the story of Gryla is she was a beggar who walks around asking the parents to give hr their disobedient children.  You could either chase her away or give her (non-children food).

The Yule Lads are the sons of Gryla and Leppalud.  Each one of the lads comes into town during the 13 nights of the yule.  The children will leave theirs shows on the window sills, the visiting lad will leave gifts in the shoes of the good children while bad children get a potato.  Later in history, each of the Yule Lads do are assigned mischievous and less gruesome acts upon bad people.  One will slam doors, while another Hides in the rafters and snatches sausages that are being smoked and so on.

The Yule Cat a pet of Gryla and Leppaludi.  This you need some background info. If you worked hard and was good for the year, you are presented new clothes for Christmas eve.  This giant cat roams Iceland and devours those who do not have new clothes. 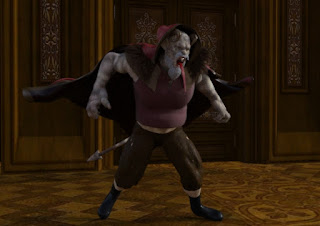 Krampus the current king of the Christmas Creatures-  In the last several years this fella has become popular in the United States and other parts that were unaware of him. TV shows, movies and other media have made him the celebrity of the pagan Christmas traditions.  I will mention more about the Krampus in my next post.

Kallikantzari- a unique set of creatures.  They usually live in the underworld; they spend the year trying to saw through the tree of life. When the sun begins to have fewest hours during the day, near winter solstice, they forget the tree and come above ground to torment the living.

Around the epiphany (January 6) the sun begins to show more light, so they return to the underground.  During this short period, the tree of life has repaired itself, so they start again trying to saw it down.

They tormented the living differently depending on the location of the story.  In some areas, at night they would jump on the back of an unsuspecting traveler and demand them to take them wherever they wanted.  This would end at the crack of dawn.

Some countries they tormented adulterers.  Here they would wait for them to leave the house to commit adultery, and again jump on their back, this time beating, whipping or biting their backs.

As you noticed some illustrations above are from public domain, however some I created with Daz Studio.  If you want to try to create your own illustrations and animations, try it.

So that is some of the terrifying Christmas creatures.  Next time we will continue our journey into these holiday horrors. You can read it here. 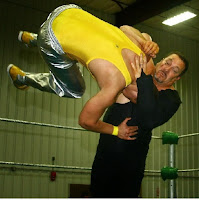 W.A.Rusho is a historian, professional wrestler and author.  You can reach him via his website or email.