Krampus and Other Terrifying Christmas Creatures 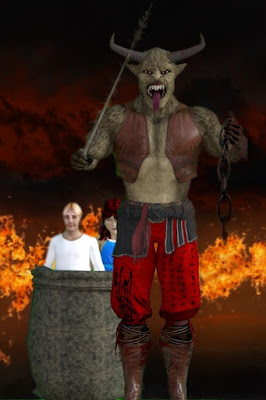 It is almost Christmas and time for my post about those other Christmas nightly travelers besides Santa Clause.


Much of what this post describes comes from legend and also from the works of Jacob Grimm (yes, from the Bother’s Grimm). He was a great historian and an authority on linguistics. We owe much to the history of Germany because of his research and writings.


Before we begin, we have to remember that many of the creatures/people I mention below are companions of Santa Clause.  In fact, they act on his behalf, allowing the jolly St. Nick to get all the glory and love by giving presents, while they are feared for punishing children.


Knecht Ruprecht (aka Farmhand, or Servant Rupert) this character originated in Nuremberg, Germany in the 17th century.  He would ask children if they could pray?  Those that did got candy or fruit, those that couldn’t got coal or a beating.


Zwarte Piet (aka Black Pete or Black Peter) this is an unusual character. Like the others he accompanies St. Nicholas on his trip. As his name suggests he is often depicted as black (either from his race or because he went down chimneys) He appears in the celebration on the evening of 5 December (Sinterklaasavond, which is known as St. Nicholas' Eve. At one time, St. Nicholas punished wicked children, later it was Black Pete who took this task over.  I have a theory of Black Pete, he is sort of a bogeyman warning children to pay attention to their parents.  At one time, the Moors from Northern Africa raided many parts of Europe and captured mostly woman and children to be sold as slaves.  Black Pete may be a warning to the children about these events.


Belsnickel- Is different than the others, for he is not a companion of St. Nick, but travels separately. He is similar to the origins of St. Nicholas, for he either gives presents to good children, and punishes the bad ones.


Perchta (aka Bertha, Percht, Berchte) She may of originated from a amalgamation the old Germanic/Alp Pagan religions. In many places she has two forms, one beautiful and white, the other old and haggard.  In other areas she has a swan foot, representing her connection to nature and being a shapeshifter. She roamed the countryside during the 12 days of Christmas. If children were good, they found a coin, if not, she would slit their bellies open and stuff it with straw and pebbles.  She would also do this with people who spun yarn. If you did your work all year, you go rewarded.  If you slacked on your job, you too would have your stomach slit open.


Namahage- We are going away from Europe for this one. He is a person dressed up as a Japanese demon.  He would have a frightening mask, wearing a straw cape or coat and carrying a dagger. Often he would yell out such sayings as “Are there any naughty children around”.  Parents would know who was portraying him that year and might hire him to scare their children into being good. Usually these performances occur around New Years.


Now we are back in Europe but heading north to discuss the Icelandic Christmas folklore.  It seems like the creatures get darker and more violent as we go north.

Gryla – Gryla is a giantess, or troll, who searches for children and then cooks them inside a huge pot for stew. She has a husband named Leppaludi who mostly stays at home in their cave.


The Yule Lads are the sons of Gryla and Leppaludi. They are a group of 13 mischievous pranksters who harass people. If a child has been disobedient, they leave a potato in their shoe.  They have some weird names associated to their traits. This includes Pottaskefill who steals what is left in pots, Askasleikir who waits for someone to put down his bowl so they can steal it, and Hurðaskellir who likes to slam doors at night to wake people.


The Yule Cat- this is a very weird tale. If you are a hard worker, or good child you receive an article of clothing at Christmas.  This monstrous cat roams the countryside during Christmas time (Yule) and eats people who have not received any new clothes.


Now we come to the undisputed king of the creatures of Christmas the Krampus. He has become more popular in the United States having appeared on shows like The Venture Bros., American Dad and also having his own horror movie in 2015, but I like to think I knew about him much earlier because of my interest in medieval history.


The Krampus is a tall, half-goat demon like creature. He is noted for having a long red forked tongue and horns. He carries birch sticks (called a ruten) to beat naughty children. Birch is very significant in pagan religions, symbolizing growth and renewal. In some sections near Austria, the ruten is painted gold and hung in the house as a reminder of children to behave.


He also carries chains, this may be an added feature from Christianity indicating the binding of the devil. Later it may have been associated with St. Nicholas binding him so he would become his servant.


Another item he carries in many of the stories is a large sack.  In it he takes away the worse of the children, to a destination to consume later or back to hell with him.


Feast of St. Nicholas is celebrated on December 6th, December 5th though is Krampus Night, or Krampusnacht.  In some countries there is a parade where many young men dress as the Krampus.  It is customary for you to give them schnapps when they approach you.  Imagine a bunch of young men, dressed as a demon carrying birch sticks to hit people with, then imagine what happens when they are full of schnapps. 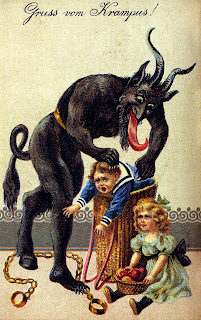 In the 1800’s it was common to have greeting cards featuring the Krampus (called Krampuskarten).  Most of the time he appeared menacing children, but others he was pursuing buxom woman.

As scary as the Krampus is, the most terrifying part is he rides along with St. Nicholas in his sleigh. Like many named above, he is a companion of the jolly fellow, and does his bidding.  He beats children or takes them to hell, at the behest of St. Nicholas.


I hope you enjoyed our discussion of the sinister Christmas creatures.  Like many celebrations, Christmas is a modification and combination of old traditions and new.


Have a Merry Christmas and I hope the Krampus is not looking for you.

W.A. Rusho is a professional wrestler, author and historian.  You can reach him via his website or email.

Want to give a Blogger a perfect holiday Gift?  Just click and ad on their page!!!
Posted by W.A. Rusho at 7:03 PM